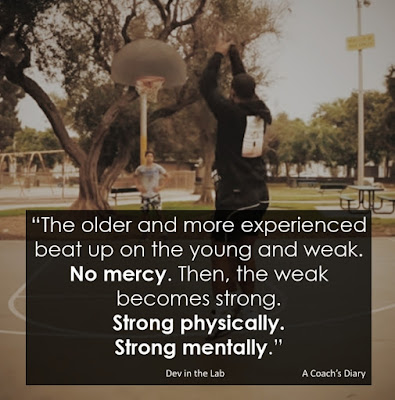 This is a mindset that I grew up on. When I was in middle school, I would have my parents drop me off at the rec or the park so that I could play against the high school kids and men. I have to admit that I used to be scared to get on the court, but I knew that playing against the older guys would help me get better.

One thing that really helped me was that one of the older guys was a good friend of mine who encouraged me and gave me the confidence to get out there. He just told me that I could play with them, he kept pushing me to get out there, and he would pick me to play on his team.

There were good days, bad days, and ugly days. On a Monday, I would have a great day of playing and feel like I made it, and then a couple of days later, I would get laughed out of the gym. There were so many ups and downs and emotions, but I just stuck with it.